Since everyone else is doing it, I might as well...

I know that since season premiers are all over the place this month, I just want to give a shout out to my favorite show. The Office. Boom, done. I don't care how trendy this show is, it is the FUNNIEST show on the face of this beautiful earth. Let's take a look at Laura's favorite moments of the past seasons: 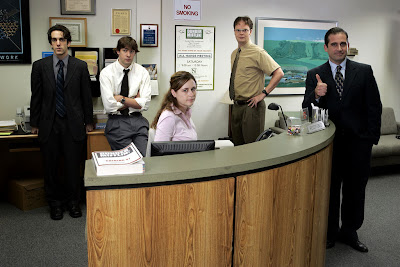 -When Michael took Jan and the other business man to Chili's and ordered an "Awesome Blossom, exrta awesome"

-When Michael burned his foot on the George Foreman grill, "I like to wake up to the smell of cooking bacon, sue me!"
- In the same episode when Michael invited the handicapped (couldn't move legs) man into the office for a seminar and asked him, "How long does it take for you to brush your teeth in the morning?" and the handicapped man replies sarcastically, "I don't know, about 30 seconds." and Michael then looks at the employees and says, sadly, "That's 3 times as long as it takes me..."
- When Dwight was bouncing on the work-out ball at his desk, and Jim gets up very non-chalantly and pops it with a pair of scissors.
- Michael is an idiot: "Wikipedia is the best thing ever. Anyone in the world can write anything they want about any subject. So you know you are getting the best possible information."
- When Jim printed out Dwight's security name badge incorrectly: "Jim, my middle name is Kirk, not FART." And made the name badge 30 times too big.
-When Jim came to work dresses as Dwight, and then when Dwight came to work dresses as Jim. "Identity theft is a crime Jim!! MICHAEL!!!!!!!!"
- The episode that went over all the pranks that Jim has pullen on Dwight. My personal favorites is the nickels in the phone receiver. If you do not know this prank, you should watch it again.
- "What smells like up dog?"
- So, Mr. Scott, would you say that you have been directly under Ms. Levinson the entire time?", "That's what she said", "What was that?", "THATS--WHAT--SHE--SAID"
These are just a few of the funniset moments in my life. Cherish them.
at 4:13 PM

I just love Dwight and Jim's relationship. It brings a smile to my face to know that 2 work colleagues can equally hate and do unspeakably cruel things to each other. hahaha

So...what did you think of last night's premiere? It was so gosh darn good. Normally I give it The Office 2 thumbs up, but today I'll give it 3.

Oh hey...did you see that one Tide commercial that showed during The Office. The one with the rapping stain. For a Tide commercial, that was pretty funny. Well that commercial was the winning spoof from Tide's Talking Spoof Contest. They decided to create the contest after their original talking stain commercial that first aired during the Super Bowl earlier this year.

Anyway, the winner, John Michael Sy (aka Emcee Miko) was featured in The Chicago Sun Times.

Check out the article: http://www.suntimes.com/business/lazare/1184147,CST-FIN-lew25.article

...and in case you missed the commercial, check out the “Stain Rap” spoof on: http://www.tidetogo.com/ads

I hope I'm not overstepping any boundaries by telling you about this. I work for Tide and if you have any questions, feel free to contact me.