So now that I'm engaged and the initial shock has subsided, it's time to PLAN A WEDDING!!! I have had so much fun so far! I have been engaged only for about 3 weeks, but have almost everything done! Here's the list of stuff checked off: Date (06/07/08), Place for wedding (Las Vegas LDS Temple

), Place for reception (Tropicana LDS Chapel), Wedding Dress, Temple Dress, Bride's Maids Dresses, his ring, people to do cake, flowers (Gerber Daisies), food, decorating. I've made lots of appointments, and have searched through millions of magazines! I do love it though.
I am, however, still searching for a photographer that knows all about Mormon weddings.
at 5:16 PM 2 comments

So he finally asked me. We talked for a little bit, kissed, hugged, and then finally made our way out to my car. As we were leaving, he said, "There is just one thing." I asked what he was talking about, and he said, "You can't tell your dad, because I didn't have time to ask him." Regardless of how intimidating fathers are (my dad happens to be the most intimidating of them all), it is a huge NO NO to not ask the father's permission. I started to freak out, and told him that either he has to go to my house now and ask my dad, or I have to give him the ring back. He went on with his story for another minute or two, and then finally told me that he had asked my father the day before. I about lost my mind on him. I am NOT gullible, except for when it comes to him!!! I was ticked, but not because I knew now that I was definitely going to marry the man of my dreams!!! We went back to my house at about 10:30, to anxious and very excited parents. We talked with them for a while, and them I reluctantly took him home and kissed him goodnight. I had work the next day, but didn't know how I would sleep!!
at 4:58 PM 0 comments

Getting pretty anxious... And then BAM!!!

Well, I knew that Matt and I were meant for each other, but since I'm the girl, I couldn't do anything about it... He would drop little hints that he was going to finally pop the question, but never did. My co-workers had me convinced that he was going to ask me to marry him! We even went to a ring store in the mall so he could get my exact ring size!! So I was convinced it would happen soon. Well, the weeks went by, and I thought everyday, This could be the day! And, it wasn't. Matt has always been about being random, and full o

f surprises, and so when Valentine's Day rolled around, I knew he wouldn't do it then. I worked all day on the 14th, so he said that he wanted to get together the night before, and give me my gift then, so that I could "enjoy it on Valentine's Day" I agreed, and didn't think another thing of it. So the night of the 13th came around, and I picked him up, and was so anxious to give him his gift that I pretty much threw it in his face when he got in my truck. I got him the top of the line basketball shoes that were all fancy with straps and pumps and what not. The last pair of new basketball shoes he got were when he was in high school... (He is now 25, so do the math...) Yeah, he desperately needed them. I thought I was the best girlfriend at the time, and that I would be scoring some major brownie points for this one... Well, we went to dinner with our friend, Brittany Warnock, and then went to the LDS Institute to play games. It was getting pretty late, and everyone was starting to leave the institute. He pulled me into the Relief Society room (where we first talked, and he asked me to hang out for the first time) and he sat down at the piano. He started to play one of my favorite songs that he wrote, but this time, there were words! He sang about the relationship that we have had so far, and how he wanted to continue it! I started to cry as the song was very personal and beautiful. When the song was over, he sat me down at a chair and told me to c

lose my eyes and hold out my hands (which is common with him). As I was sitting, wondering what he possibly could do for me that Valentine's Day, he was rooting around in this backpack. He finally zipped it up, and I heard him shuffle around. I finally felt his cold, shaking hand touch and turn over my left hand, and my mind went NUTS! I thought, OH MY GOODNESS, THIS IS IT!!! I felt a ring on my finger, and as he slipped it on, He said, "You can open your eyes now!" I forgot that I was squeezing my eyes shut, and I opened them to hear, "Laura Lee, will you marry me?"
at 4:09 PM 0 comments

So we started dating, and we were having so much fun! We were going on dates and getting to know each other a lot better! His family came down from Idaho to participate in UNLV's Family Weekend. We all w 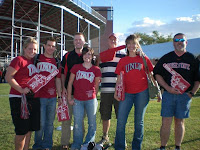 ent to dinner, a football game and then had dinner at my house that Sunday. I met his dad, sister, Ashley and her fiance, Nate. We all got along great and were having a lot of fun. Because Matt is the genius that he is, he was spending a lot of time at UNLV, studying and since he is a Senator there, was putting together events and what-not. But we spent as much time as we could together. I went up to Idaho to visit with him and his family over Christmas and New Years. I met some of his childhood friends and watched some of the home movies that all teenage boys make. I saw another side of the man of my dreams, but it was hilarious! We took longs drives (my favorite), went snowboarding, met his grandparents and had a blast. We were in love, and at the peak of our relationship... Or so we thought...
at 1:54 PM 0 comments