While I'm waiting for class to start...

I know that many of you are anxious to receive some pics of the Cutlers as we have embarked on a new adventure in IDAHO.... Well, the time has finally arrived my friends. That's right. I have here for your viewing pleasure a plethora (nice word, visually) of pics ranging from (of course) Christmas in Vegas with the fam and friends, to Matt's first day of work and every random photo that I have in between. So, without further adieu, let the games begin. We'll start back at the beginning of December and work our way to the present.
I worked at the College of Engineering at UNLV before we moved and I got really close with my boss, Christine. She was kind enough to have the 'work family' (Matt, Me, Vik, Kush and Iani) over for dinner before graduation. We had a wonderful dinner and after, we went and did a few things that you just need to do if you're in Vegas 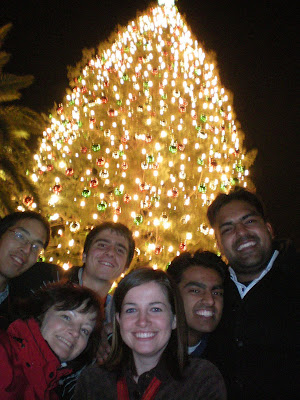 We went to the M Resort to see the largest Christmas tree in America!! 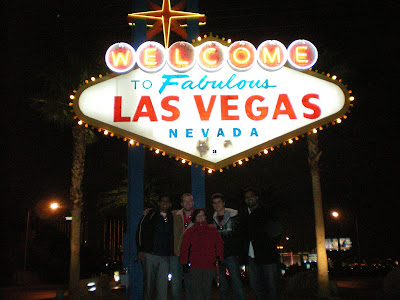 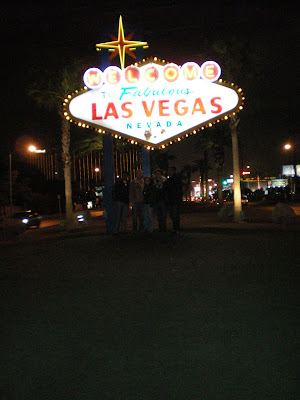 And then we went to the LAS VEGAS SIGN!! Classic.
SUCH A FUN NIGHT! Thanks again Christine!
Then in mid-December, we went to my parents' house to have Christmas. Matt, Hunter and myself were all not going to be there for the 25th, so we had a half Christmas a little early. 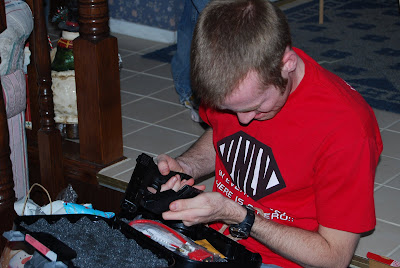 My dad got Matt a Glock. Yes, if you are wondering, he plays with it like he's a bad a. 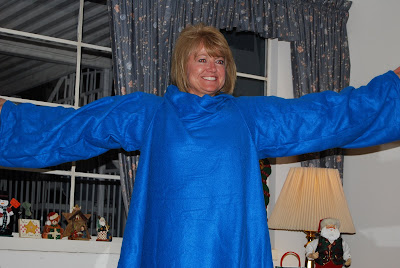 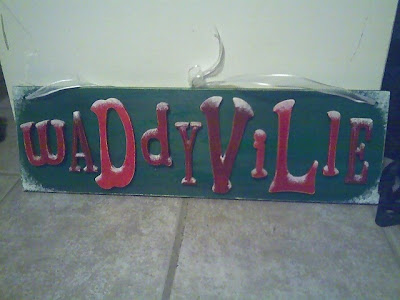 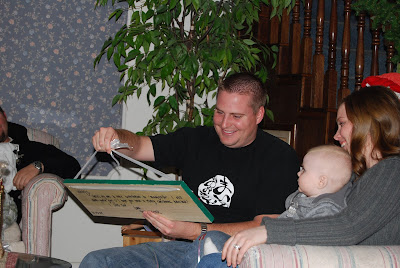 Every year, Waddy has a special ceremony that goes on at the Wadsworth home. It's the setting up of the Waddyville. Waddyville is his Christmas town that he cherished and plays with all season long. I make fun of him for it a lot, so this year, I decided to do something kind, and I made him a sign to hang over Waddyville. AANNDD, I think he liked it. 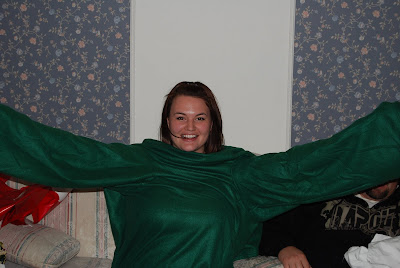 We didn't want to leave Brittany out with all the Snuggie fun. Only this one isn't a Snuggie. No, it's worse. (Is that possible? Yes.) This, my friends, is the Hugglie. We re-named it the Fugglie. Same difference. :) 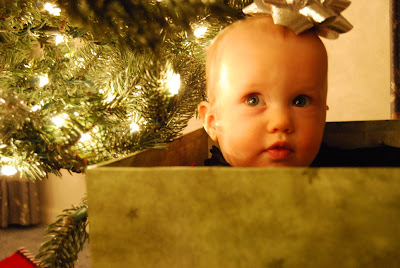 My niece. I took a few photos of her for Christmas, and there's really no other reason that I've posted them than for your own viewing pleasure. I just think that she is freaking CUTE! 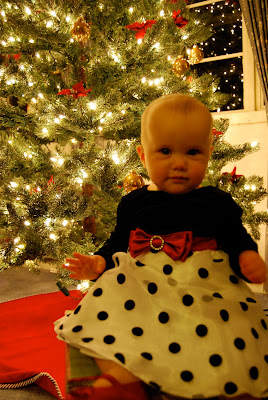 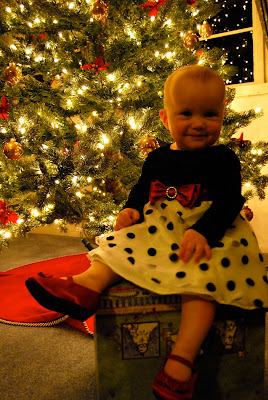 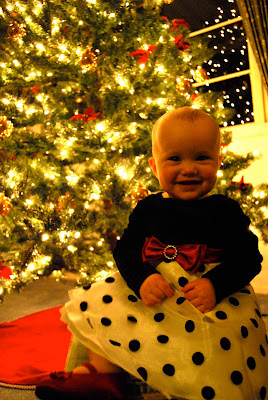 She going to make me want kids sooner than I really do. No kidding. 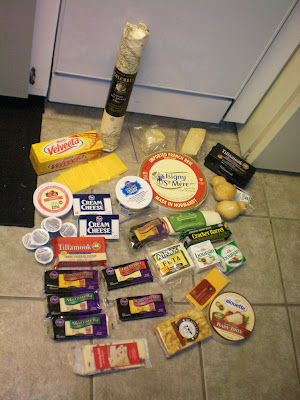 We were getting ready to move, and wanted to see just how much Matt is obsessed with cheese. This is all the cheese that we had in our fridge at one time. It's a sickness. I'm trying to get him to see a doctor. :) 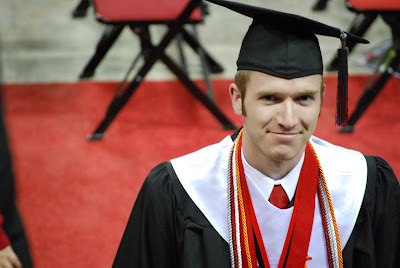 What a hottie. Seriously. He's hot. 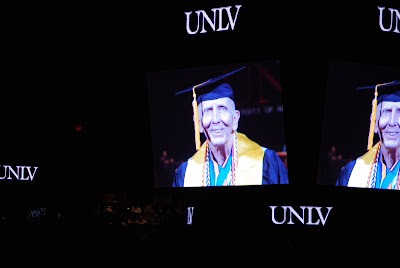 This is James Nott. He went back to school at 72 to try to get is Doctorate. He completed in 4 years, and finally graduated with a Ph.D. in Engineering at 76. He was an outstanding graduate for all of UNLV. 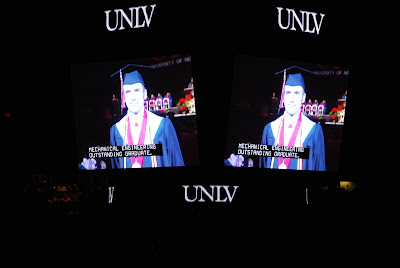 And here's another stud of UNLV. Now, I don't usually brag about anything, but I'm going to take a minute to brag about my husband. He was one of the 7 (out of 3,000 graduates) UNLV Outstanding Graduates. Not only was he that, but he was chosen to be the Outstanding Graduate for the entire Mechanical Engineering Department as well. Pretty neat eh? He has about a 2-3 minute segment in graduation where he stood up and all of his specs were read. Among some of them were the he served on the Rebel Pride Council and was in charge of Rebel Premier, he was a Senator for the Engineering College, and Senate President. He was also UNLV 2008 Homecoming Que... King. :) I'm pretty proud of his hard work. 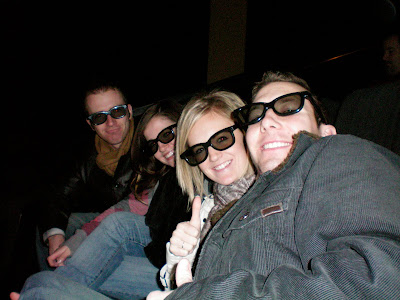 As soon as we moved to Idaho, we went to see Avatar 3-D with our friends Matt and Cassie. This movie was seriously freaking sweet freaking sweet. Go see it. In 3-D. Now.
Let me preface the next couple of pictures with a story. On Christmas Eve, we went over to our cousins' house. The Lovelands. This is probably the coolest family that you'll find this side of the Mississippi. Well, we played some Mario Kart and opened some presents, and as we were about to leave, the topic of snow came up. I stated my sadness about not having a white Christmas. (I just moved 600 miles, and the one things I was excited about was having a white Christmas. But it hadn't snowed substantially in Idaho yet. Well, the Lovelands were all very kind to me, ensuring me that next year would definitely be white. Then we drove home and went to bed (watching It's a Wonderful Life, of course) We woke up the next morning around 8:30 or so to this.... 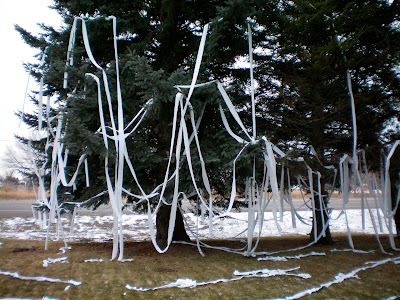 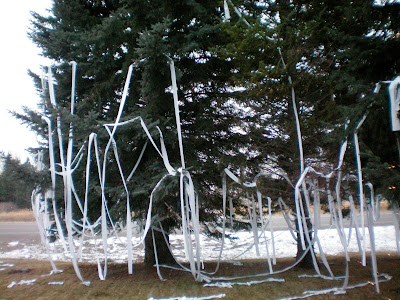 We had only been in the house for a few days, and someone already TP'd us?? Wow. How low can you get. Well, that is what I felt until I opened the door. There was a sign on our door that read, "Wishing you a very Merry first white Christmas" The Lovelands woke up extra early and came to our house to make sure that we had a white Christmas.
Needless to say, we love them a whole lot. :) 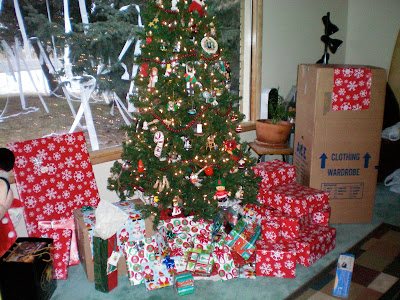 And this is what out first Christmas in Idaho looked like. Matt wrapped the one on the right. Could you tell? 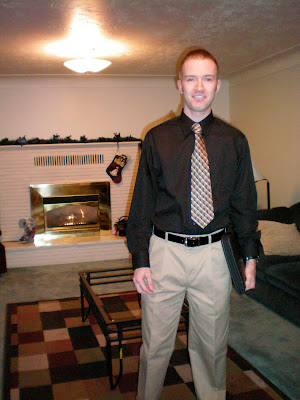 And finally, to round off the picture-fest, we have my punkin on his first day as a 'real boy'. I mean man. Haha This is on his first day of work. At 5:30 am, let me remind you.
We've had such a blast being with Matt's family up here in Blackfoot. We've had plenty of Pit games, and we've even gone to a Blackfoot High School basketball game, where Matt became the star of the student section by yelling things like "#42, you need to cut your hair!" and "Brokeback Mountain" :)
Well, anyways, I hope you're enjoyed this edition of 'It's about time I update my blog with things that have been going on around here' Stay tuned for the next episode entitled 'Probably not as interesting, and definitely not as many pictures'
Well, despite what the title of this post is, I didn't finish before class, but the post is here. Now bring on the comments.
:)
at 12:38 PM 6 comments