Matt had a huge test yesterday, so when he got home from school, we just flopped (my family's work for just sitting around). Our friends Rick and Heather brought us back a pomegranate from his family's house. We got two bowls and the pomegranate and headed upstairs. We spent a whole hour peeling the thing and watching Criminal Minds. I love ppeeling pomegranates!! It's almost as satisfying as scraping popcorn off the ceiling, pulling feathers out of a feather pillow (Heather), or peeling glue off of my hand in elementary school. Plus, we found out that these mothers grow really well in Vegas, so Matt and I are looking into planting one in our front yard... 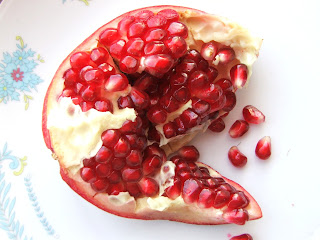 King Cutler. Does that make me Queen??

Well, life's been pretty normal lately. I'm working and Matt is going to school. Yadda yadda yadda... But a few big things have happened since...
A couple weeks ago was Matt's Homecoming week at UNLV. He was involved with a lot of activities, and was even nominated Homecoming King! He had to go through a lot to continue in the process. First, the club he is apart of nominates him. Then the committee checks his GPA and all that jazz, and once he is past that, he has an interview and also makes a banner to promote himself for Homecoming King. From those that complete the interview and banner, they are awarded points and the top 5 boys and top 5 girls advance to court. Then, the school votes. For a whole day, student get online and vote for who they want to win. At halftime during the football game, the winners are announced. Matt knew he wasn't going to win, but he did think a guy named Marco was going to. He had a lot of support from his frat brothers, and had a pretty good chance. Well, I guess at UNLV, they announce the runners up, which I think is a huge insult. That's saying, "Hey! You ALMOST won!!!" a.k.a. HUGE kick in the face. Well, the runner up for King was Marco! Then I really started to get nervous! Then they announced, "The 2008 UNLV Homecoming King is Matthew Cutler!!!" I couldn't believe it! Well, I guess I could, cause my husband is a freaking hottie with a body... ;) Everyone at UNLV knows and loves him, and he's pretty dang involved. He was shocked. And the other LDS girl on court, Ilse Zuniga won as well!!! It was such a fun night, and Matt rocked that crown and gay scepter like no one's bid-ness. And then we went home and went to sleep, cause that's how married couples roll. ;) 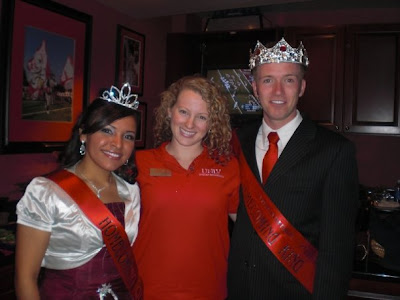 Matt and Ilse with Chelsea Milko. Matt is such a tard. 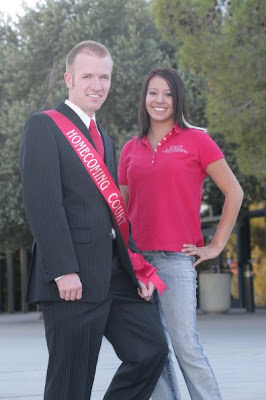 Hey guys, Handbag Planet is having a promotional contest on October 15, which is their opening date. They are giving away one handbag every hour for the full 24 hours!!! Check out the website, and register to win one: