Idaho is a Magical Place... 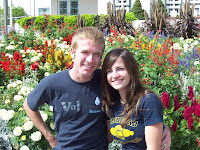 After we became friends again, we both decided that it would be nice to visit Idaho before school started up again. He thought I was kidding when I told him to book the flights. I was dead serious, and 2 weeks later, we were flying to Idaho. As we met with his family and friends, I realized that I really wanted to marry a guy like this. We were lying outside (we camped out in his backyard) in the middle of the night, and he leaned over and said that he couldn't do it anymore. I asked him what he was talking about, and he said that he couldn't just be my friend anymore. I agreed, and so our relationship began.
at 3:23 PM